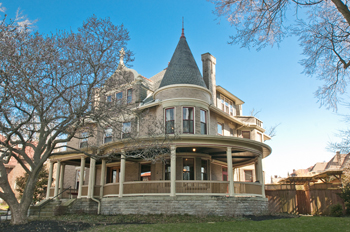 Adam’s experience with historic homes is not limited to helping clients with buying and selling homes; he has lived in homes that he has restored as well. In late 2007, Adam bought the home at 3924 Rose Hill Avenue in the historic Rose Hill Subdivision of North Avondale. The full restoration of the home took 10 years to complete. What initially drew Adam to this architect-designed house were its splendid architectural details: on the first floor, each room has a different species of wood (including an entire room of bird’s eye maple in the music parlor and another room of rosewood); a butler call system, probably from a 1920s overhaul; a seven-foot by seven-foot stained glass window of Persephone along the main staircase; and original built-in marble sinks and walls—not to mention bottom-lever Douglas toilets.

It was a unique find because the house had suffered neglect instead of the more common “remuddling.” Adam was the third family of ownership in 113 years. Outside of some mild modifications from (most likely) the 1920s, very little had changed for good or for bad. While many of the mechanics were nonfunctional when Adam purchased the house, luckily, few had been updated, and most of the practically irreplaceable elements were intact. It is much easier and cheaper to replace old pipes, wiring, and furnaces than to find built-in marble sinks, stained glass, eight-foot-tall (and extra wide) front doors, and the like.

While Adam had experience restoring other properties in Westwood and Price Hill, his Rose Hill house supplied new challenges as he opened up the walls. His first priority was to make the roof tight and replace and install whatever was needed prior to the plaster being repaired. Both of the second floor bathrooms had non-operational toilets, sinks, or tubs that either didn’t work at all or leaked badly. The drain and supply lines were so far beyond their functional life that Adam had to install over four hundred of plumbing, including two drain stacks from basement to roof and hot and cold supply lines to four bathrooms.

While the walls were open and the chases to the second floor were exposed, Adam ran new electric and communication wiring. He also replaced the electrical service and fuse distribution panel with modern circuit breakers. While some minor modification of the floor plan on the second floor was needed to add closets and a second floor laundry, Adam saved all of the woodwork and reused it in new locations in the house.

After the mechanics were up and running, Adam brought in a plasterer who nearly lived with him for over two months. The original plaster, in terrible shape, was one of the most costly items of the restoration; most rooms had extensive water damage from years of leaking box gutters and split drain lines. Every four-foot-wide patch inevitably turned into half of a ceiling that needed replacement. Among the plasterer’s repairs were the radius cove ceilings in the turret areas using plaster and metal lath verses drywall. During this work, Adam kept one room ahead of the plasterer, removing light fixtures to be rewired, removing picture hanging molding to be stripped, and masking the woodwork from dripped plaster. As the plasterer finished a room, Adam then followed, priming, painting, stripping and shellacking replaced molding, and reinstalling rewired light fixtures.

After the first two floors were rewired, plastered, and painted (minus the kitchen, baths, and back staircase), Adam sanded and refinished the floors. He then had created a nearly livable house. By this time spring had come, time to tame a jungle yard, re-glaze and repaint windows, install insulation in the roof, and install two high efficiency furnaces as well as central air conditioning with ductwork revamped to zone the house. The windows’ repair, insulation, and furnace replacement were the top priority to avert $1,800 monthly heat bills experienced the first winter. Adam also had the collapsed concrete porch floor, portions of the sidewalk, and the driveway replaced.

The following winter, Adam gutted and completely rehabbed the kitchen. With its rusted-through 1950s metal cabinets, Adam had no guilt in starting from scratch, keeping only the original built-in butler’s pantry and the butler-room call box (He did reuse all of the window, door, and baseboard moldings). Adam also kept the house busy with smaller restoration projects, whether short, weekend tasks like stripping and refinishing entry doors, or larger, summer-long missions, including rebuilding the porch with its Swiss cheese porch roof.

Restoring this home led Adam to some fun and curious discoveries while opening up walls, including discovering a path to climb inside the cone roof of the turret, then later falling into a fresh air shaft under the basement floor (connected to a vent under the porch that fed the original gravity heat furnaces). While at times Adam wondered how he got himself into this endeavor, in the long run he remains glad to have brought back the splendor of this historic architectural gem.

Before and after gallery