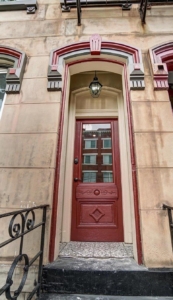 Recessed entrances above grade with several steps leading to them are typical of the Second Empire architectural style. 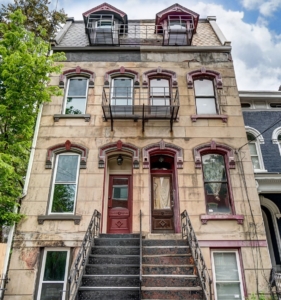 Our listing at 1106 Dayton Street, Cincinnati, Ohio (MLS #1660355), is an outstanding example of a Second Empire rowhouse. The limestone front creates a sense of grandeur, timelessness and durability. Its tall, paired windows with ornate hoods draw the eye upward, to be pleasantly rewarded by the well-designed and aesthetically pleasing lines of the mansard roof. There is no doubt where the entrance is located, poised to welcome visitors up and above the street’s every day activities as they ascend the front steps.

As the name implies, the Second Empire architectural style, also called the French Second Empire style or mansard style, began in France during the reign of Napoleon III, 1852-1870. Napoleon III had much of Paris rebuilt with wide avenues and monumental buildings. Earlier medieval alleys and structures were replaced—another example of the constant push and pull to modernize historic buildings and communities no matter what the year. 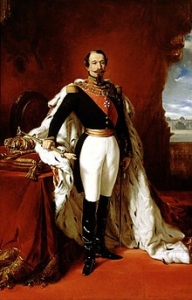 Paris’ reconstruction had a big impact on building design and the Second Empire architectural style was soon imitated throughout Europe and the United States. 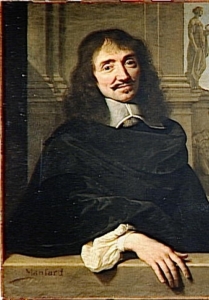 The Second Empire style is most known for its mansard roof, popularized earlier by the French architect, Francois Mansart (1598 – 1666). During the Baroque period (1600 – 1750), Mansart used this eye-catching roof type extensively in many of his grand chateau and townhome designs. It’s a perfect blend of classic elegance with the benefit of having more livable space in the uppermost floors of homes.

Under their distinctive roofs, Second Empire homes have much in common with other Victorian-era styles. In particular, the style is very similar to Italianate in its use of overhanging eaves with decorative brackets, and ornate door and window hoods. 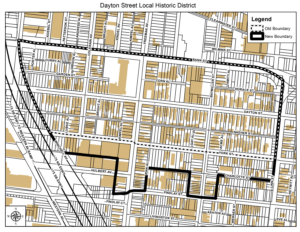 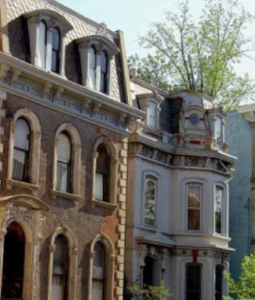 Built in 1895, 1106 Dayton Street is within the Dayton Street Historic District, located in the old West End neighborhood of Cincinnati. In the late 19th century, the neighbhorhood was ‘The Place to Be’ for the wealthy beer brewers and pork packers of Cincinnati. The majority of buildings were constructed between 1850 and 1890, and are generally masonry, two- or three-story Italianate style homes. Low decorative iron fences and stone posts add to the neigbhorhood’s historical feel. The Dayton Street Historic District has both a local designation and is listed on the National Register of Historic Places (listed January 25, 1973; No. 3001457).